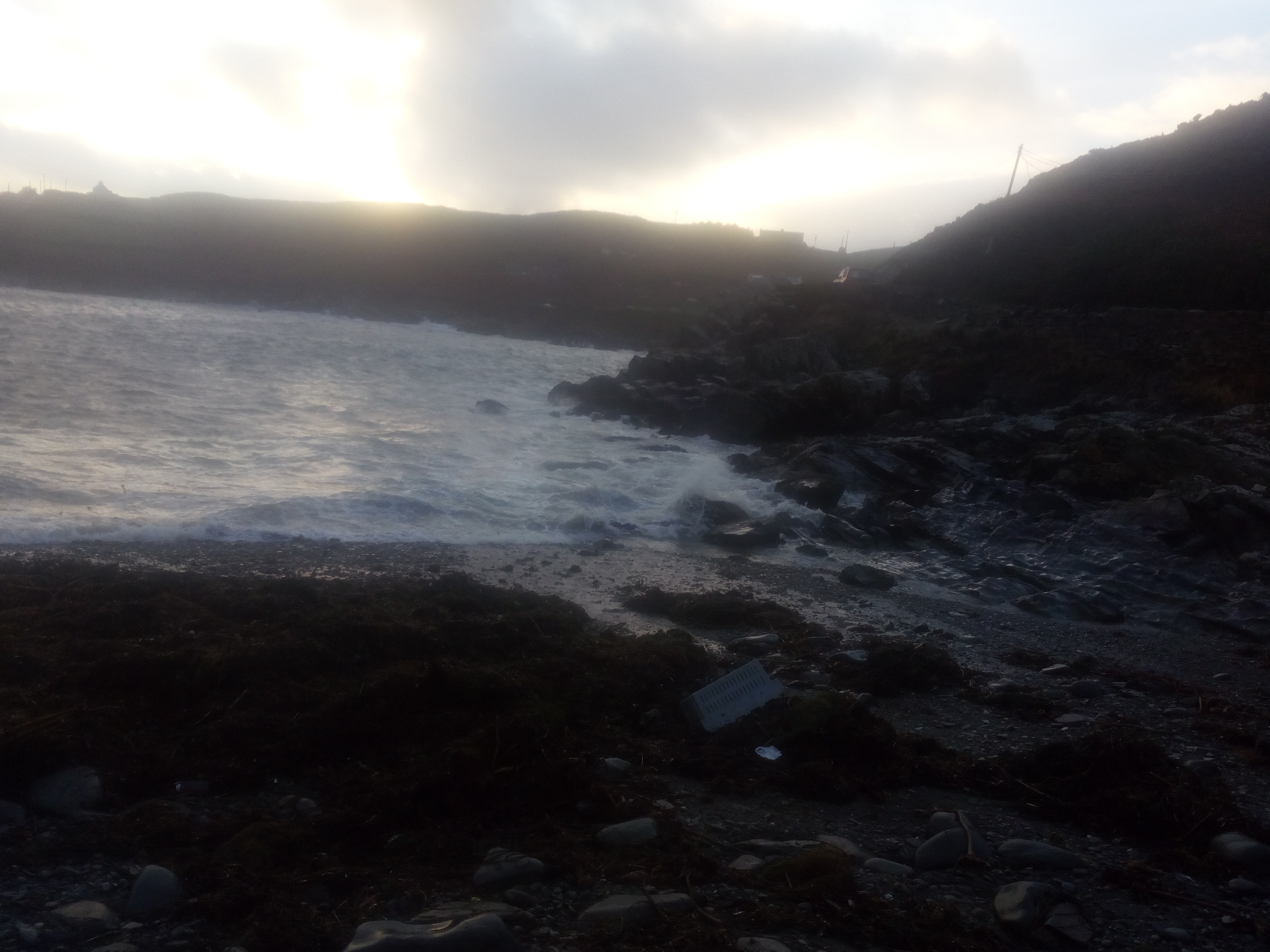 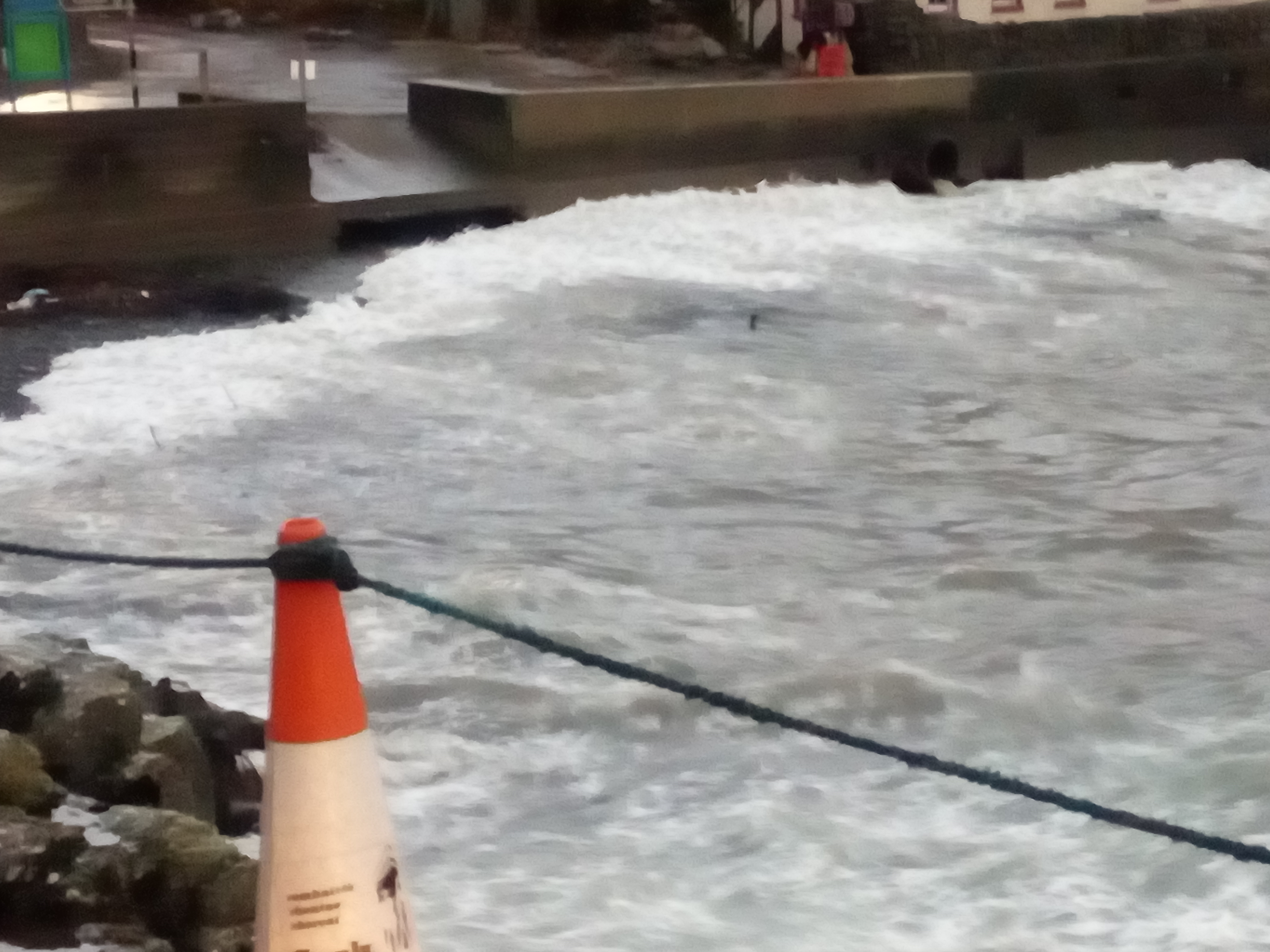 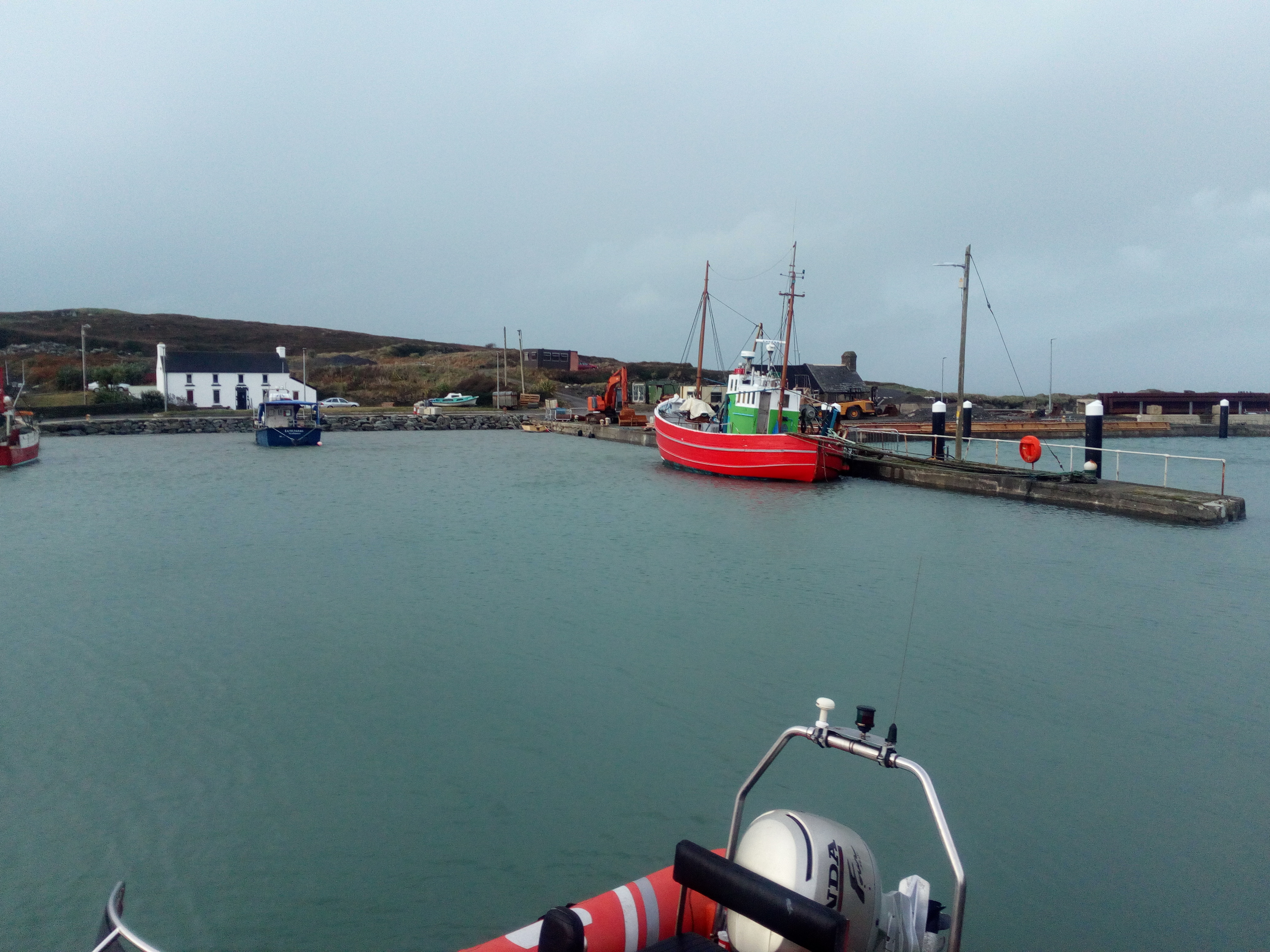 October was supposed to be the month of mellow fruitfulness what we got was not Deireadh Fómhair but tús an Gheimhridh! Ophelia was flagged up to be one of the worst storms since the 1960’s and boy did she live up to her reputation.  The day before the storm hit was deathly calm not even a puff of wind and it was very warm and foggy, South Harbour suffered an infestation of Portuguese Men of War jelly fish which belong to warmer waters it seemed weirdly portentous. We spent the day taking down flower boxes and pots, tying down and putting away anything that could have become a missile in the wind.

On Monday morning about 6 am the wind started to pick up, howling around the house hitting all points of the compass it continued to strengthen significantly until around mid-day when the wind was violent and frightening. The power and internet went down quite quickly and in the house even at midday it was dark, the gusts were ferocious, it was nearly impossible to open the door and yet oddly if felt better to be outside than listening to it inside. We had the old battery radio on constantly and listened intently to reports of what was going on around the country at the time, hoping that all our friends and relatives were doing ok.

The wind then seemed to blow steadily from the south/south west blasting straight into South Harbour. The swells were unbelievably high, the sea became malevolent mass of menace. The sea spray was so dense that it created a salt fog almost obscuring Blanan Point  as the waves blew high over it. The noise was incredible the waves shushed through the stones and boomed through caves, as the huge waves raced in they covered Oileán Fhathach, and ran up the stone dock built approximately 200 years ago filled the crevices and oozed out again. The stone dock was built by hand and it doesn’t seem to have suffered any obvious damage, a testament to the men who built it so long ago. Ophelia’s rage was something to behold, a car parked near Tír na Nóg was whooshed up by a wave to the well near the hostel. All the larger stones on the shore were sucked out leaving a drop of a good few feet from the access point on the road to the shore, no doubt Brian will blow them back in again!! The road opposite the Priest’s House was full of stones and debris washed up by the unimpeded waves, stones gouged holes in the road, the tarmac has been ripped off like icing from a cake and the wall on the road from Cummer to South Harbour has been totally destroyed in a number of spots. New areas of the shoreline have been seriously eroded. A few of us went out in jeeps to view the spectacle from; let me stress; a safe vantage point - no- one was going to be the idiot putting other people’s lives at risk by requiring rescue!

It was a very peculiar experience, it was one of those times when the power of nature could not be denied, when the wrath of the storm illustrated clearly how insignificant we really are. As the storm increased in intensity we headed home. The fire was on, the battery radio filling us in on what was happen on the larger mainland island, lit candles and waited. It reminded me very much of old times on Cape when the diesel powered generators would not be able to cope with demand and we would have a power outage for a few hours. News reports kept us up to date on what the status of the ESB repairs. We now have power through an under-sea-cable connecting us to the mainland. We were not expecting to have power for three or four days but on the Tuesday we gingerly connected  our petrol generator, wondering how long the petrol would last and how long we would be without power and then we wondered how long it would take to open the storm gates in the harbour with the back up system to allow the ferry to make a journey to the mainland.  Thankfully due to the hard work of the ESB we had mains power on Tuesday afternoon, and we were again able to properly appreciate our modern conveniences.

Oddly the day after the storm was dry, warm and sunny with blue skies a welcome relief from the days preceding it. It was a short respite, as I’m writing this Brian is blowing strongly, the rain is pounding down and the trees and plants that escaped Ophelia will no doubt suffer this time around.

The storm gave us all pause for thought and time to reflect on how lucky we are, that everyone is safe and everything is nearly back to normal, hopefully we will have our internet back soon, but for now I am off  for a coffee take care out there!